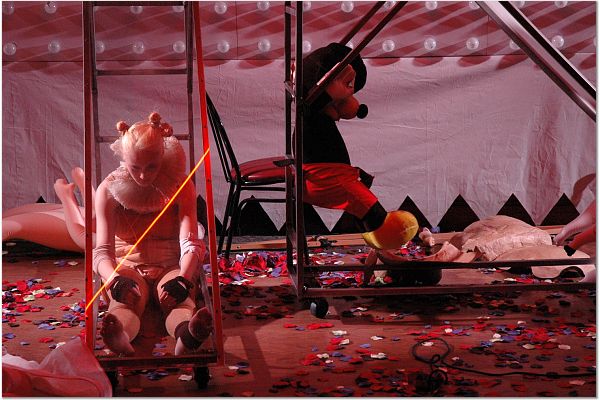 I have to start from the beginning. How did they come about. Did the project start with the short essay you wrote in response to the death of Princess Diana?

Not really. I simply wanted to write princess plays, maybe because there were Werner Schwab’s feces plays, his so-called Kings’ Plays.[i] So I thought, I’d really like to write princess plays now, a man would never do that. The princess is a pre-stage of femininity, so to speak, and then of the woman. Mary Stuart represents the Royal stage, princesses are the pre-stage, something that’s not yet settled.

Was there a chronology to your writing?

The first one was Snow White, of course. Then came Sleeping Beauty, naturally, because these are the best known fairy tales. Rosamunde was the only one that was commissioned, by the Berlin Philharmonic. And then, of course, I also read the libretto by Helmina von Chézy and I thought, one just simply has to thrash that, one has to play with that, change roles, exchange the male role. Then came Jackie, obviously, another woman in that kind of stage between. Just yesterday I spoke to a musician about how Onassis succeeded to destroy Callas as a creative person, as an artist, by marrying Jackie, who ultimately is a sexless icon, though I am sure she also attracted Ari with her sexuality.

So there is Jackie, all calculation, a very smart, educated woman, talented too, she could have had a Vogue Fellowship immediately—Sylvia Plath almost gave her life for her fellowship at Mademoiselle. Becoming a poet means everything to one, to the other it’s just an obstacle. With this total focus on the right husband everything is caught up in an intermediate stage, so to speak. So Jackie belonged with those plays. I already had written a short text about Diana, when she died. So, as a conclusion I wanted to show what became of all this: of the intellectual or creative upswing of women, of Ingeborg Bachmann, Sylvia Plath, Madelin Haushofer. That’s then the pessimistic ending—that all those upswings are ridiculous in the end.

In your case too?

Was that always that way?

Yes. That’s the role patriarchy has provided for women. When a woman risks transgressing it, as it were, she becomes ridiculous or they make her ridiculous. What I experienced after this award, unbelievable as it was, is a confirmation of my view.

When I hear and read people’s reactions, I think they resent that you don’t allow them to have pity for you.

I sense that even with women.

Well, women are happy about the award.

There are also the others. There is the envy –

Yes, that too. But the men are really malicious. Henryk Broder, an editor of Der Spiegel, attacked me on his web site. I haven’t read it but it must have been really bad, because people responded voicing their objections. That’s no way to treat anyone. Yes, there is this incredible hatred. Stefan Matuschek, in Der Spiegel called me a “Cashmere Communist.” They would have left me alone had I not received the Nobel Prize—most probably they’d have either been a bit more considerate or they wouldn’t have noticed me at all. I’d prefer that anyway. But this way one gets dragged into the public and then one is subjected to that kind of thing. I am determined more or less to retreat.