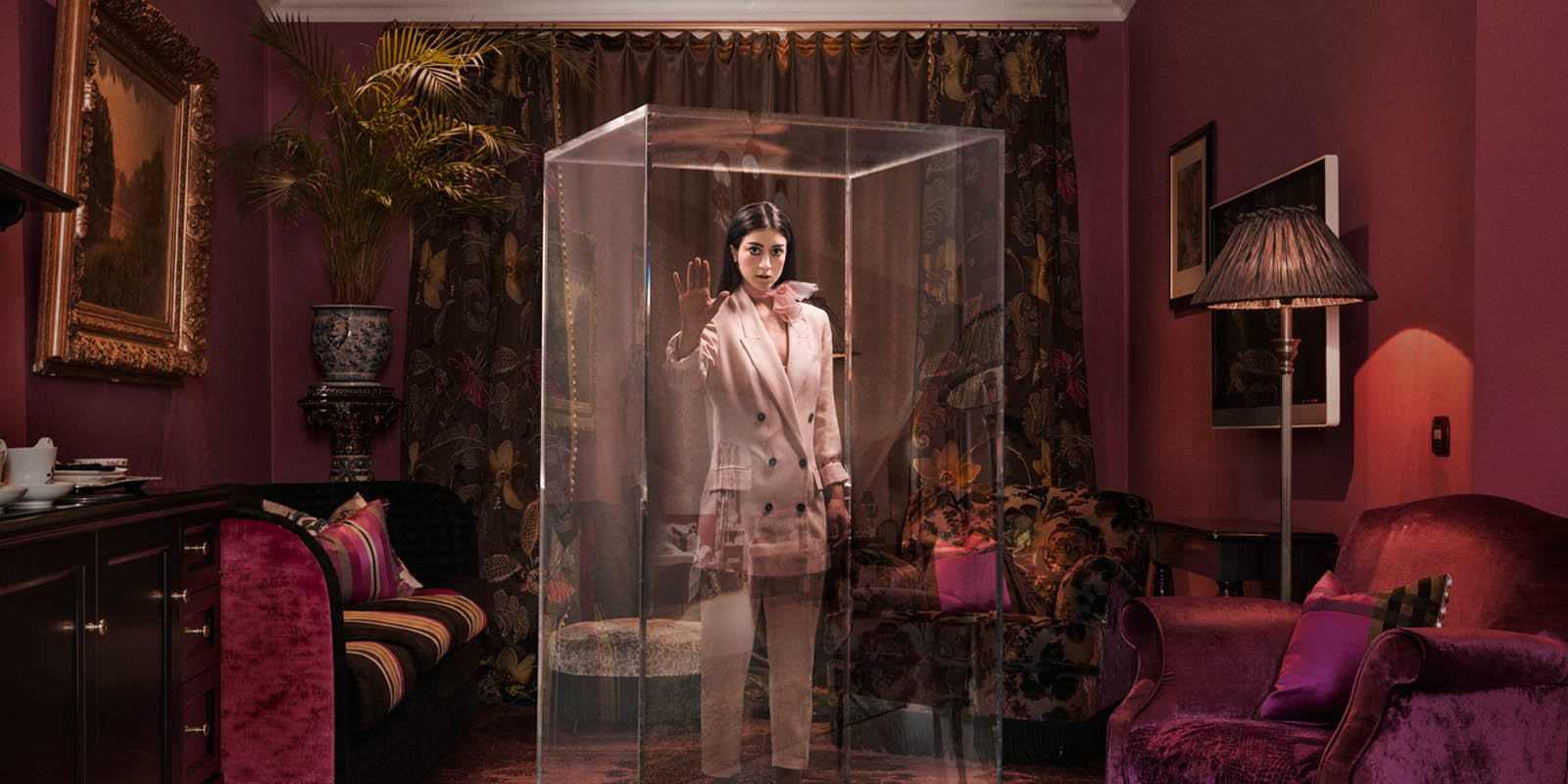 A marriage contract at the end of the 19th century is a tough pill to swallow, nonetheless, we are still entering a certain contract of moral and financial obligations when we decide to call it a marriage. What does it mean “till death do us part”? Do you take it seriously? Is it a mere ritual, an obligation to the phantom of our parents and grandparents that their surname will live on? Performance plays with Nora as Princess-drama, a narrative of “happily-ever-after” bullshit we are fed from the childhood, fairy-tales, Disney, Elfriede Jelinek’s Princess dramas are ghosts pushing this production forward.

“Yana Ross’ new production of A Doll’s House (Ett Dockhem) at the Gothenburg Stadsteater has generated enormous interest across Sweden, cementing her influence and popularity in Scandinavian theatre. Ross uses therapy as a framing method for her original rewriting of Ibsen’s canonical text. Rank is reimagined as a psychiatrist who uses role play as a form of analysis. In the opening moments, the audience is led to believe that Rank is Torvald, when in fact he is merely playing the role of Nora’s husband in an imagined scenario. He invites Nora to analyze her choices and attachments; this metanarrative reveals that this is not so much a deconstruction of A Doll’s House as a form of performance analysis, a theatrical essay of sorts. There is a dubious ambiguity to Rank’s role-playing, however, which from the outset demonstrates the compliance demanded of Nora in her role as patient, apparently for her own benefit (psychiatry).

Ross’ doll’s house is a moveable box made of large glass panels with an interior of sleek and simple furniture (“tasteful but not extravagant”) in muted colours that are sharply punctuated by dabs of bright red (a color that Nora will wear later as a reference to Sleeping Beauty or Little Red Riding Hood). The presence of a technician who films the action from outside the house reinforces our sense of being an eavesdropper or voyeur. Despite being enclosed, the crystal clear audio of the actor’s voices is reminiscent of Krzysztof Warlikowski’s (A)pollonia, in which visually we feel distanced or separated from the actors while acoustically we experience their extreme proximity. As the box moves around Gothenburg’s large main stage the bedrooms of the Helmer home are revealed on the opposing sides of the sitting room. The pale white and gray interior of the parent’s bedroom is juxtaposed with the children’s room, whose walls are vividly painted with jungle animals. The children are never present on stage–indeed, we only encounter them briefly through a Facetime call–and yet their bedroom is consistently occupied by drunken and erotic encounters. This misuse of the children’s room strongly reinforces the metaphor of a doll’s house, a structure that encapsulates children’s ideals of a domestic space that coalesce with Ross’ connections between Ibsen and Disney.

Kristine Linde is made into a man’s role (Kirster Linder), which shifts the gender dynamics of the entire cast. Nora is the only woman on stage, surrounded by a quartet of close male friends (Torvald, Rank, Korgstad, Linde). Her isolation is thus redoubled between her home and social world, which Ross deftly reframes through a Disney fantasy. We first encounter this reference as the house spins on stage and the four men first break the (literal) fourth wall by stepping through the house’s glass walls to move to a contemporary rhythmic rendition of the seven dwarves anthem to the pleasures of manual work, “Hi-Ho, it’s off to work we go!,” that is both suggestive of male sexuality and labor. The concept of role-playing is playfully extended into the Helmer’s sex life when Nora dresses up as Snow White and Torvald as one of her naughty dwarves, who needs to be whipped and punished. The quartet of men all become key players in the fantasy, the dwarves who simultaneously perpetuate the fantasy of the female sublime (a nod to Ewig-Weibliche) and male exclusivity while sexualizing female power. Even if the men compete with one another they form a bond that remains impenetrable to Nora, thus reiterating the distance that separates the collective of workers from the sublime female in Snow White. Even Nora’s binge eating becomes a game that undergirds and reassures male bonding. Ross’ neat turn is here is to sexualize the men themselves. They begin the tarantella, an erotically charged cheerleading routine with pom-poms. Nora joins them, following their lead and rehearsing their moves. Rather than suggesting a critique of gender norms in which women follow the idealized lead set out for them by men, this inverts the question of male sexuality, not only offering a comical take on homo-erotic bonding rituals but also asking to what extent male desire might be caught up in the erotic display of their own bodies. The tarantella thus reveals a side to sexuality that is normally repressed, but (as in the therapeutic role-playing scenes and the Snow White games, or when the men dry hump one another to Beyoncé’s Naughty Girl) it is not Nora’s hidden character that is revealed so much as the male social world she must negotiate.

The whole question of racism is frequently left out of stagings of the play, and Torvald’s offensive line about knitting having a “Chinese effect” is typically cut rather than explored. Ross cast Gizem Erdogan, a Swedish actress of Turkish descent, in the role of Nora. As Theresa Smalec has argued, Nora’s ethnicity is often assumed to be white and Scandinavian, like Torvald’s. Smalec asks: “How does her cultural background make her a different ‘monster’ from her husband?” Ethnicity is carefully interrogated through apparently innocuous slurs that eventually culminate in a racist tirade. Torvald reminds Nora that it is time for her upper-lip wax, thus criticizing her attractiveness and femininity through a veiled reference to ethnicity. When Torvald discovers Nora’s secret loan, however, his suppressed racism surfaces to the top: “You are a crook, a criminal, a total disgrace, calling yourself ‘third generation’ but really you are a dirty Turk!” Economic anxieties and correlated concepts of selfhood are thus racialized. Generational migrant identity, as well as ongoing problems of racism, are topics that continue to dominate Swedish public discourse around national identity, which Ross integrates skillfully into this paradigmatic Scandinavian text. There are other passing references to diversity and social equality, such as Rank’s equation of political correctness with moral decay, and his dismissal of the Swedish “nanny” state, which he condemns as “turning our nation into a hospital.” Later, the audience laughs when Torvald exclaims, “Are you saying I’m not a fucking feminist? That’s ridiculous! I am Swedish, we are all born feminists.” Torvald’s chauvinism and Rank’s conservatism provocatively disturbs easy associations of Swedish society with welfare support, gender equality, peaceful civil society, and tolerance to diversity.

The notion that freedom is sacrificed when one goes into debt is also reinterpreted. The door does not slam behind Nora in this production. Her intention to leave is framed through her refusal to be reflected through the mirror of a man (thus citing the opening role-playing scene in which Nora’s emotional life is reflected through her psychiatrist’s game). However, in the final moments of the performance, the men extract themselves from the home, looking as if they are landing on the moon, walking outside of the gravitational forces of the domestic space. They dress Nora as Sleeping Beauty, an infantilizing gesture that makes her look like one of the children. (What’s more, the whiteness of this fictional character is highlighted as a form of ethnic drag.) The house sinks into the stage as they spin a final dance, reminiscent of an early Hollywood musical, or–more recently–the dream sequence in Damien Chazelle’s La La Land (2016), while lip-syncing to Once Upon A Dream from Disney’s Sleeping Beauty (1959), putting Nora herself to sleep. In a moment of supreme irony for a play that is perhaps best well known for its ending, the final line of the performance (also taken from the animated film) is “Oh, I just love happy endings!” Ross–explicitly referencing Elfriede Jelinek’s rewriting of these fairytales–thus places at risk our own complacency in accepting Nora’s slamming door with naïve optimism as a “happy ending.” The notion of debt–already ambivalent in the original text–linked to Nora’s departure from the Helmer household renders her future economically uncertain. Her departure from her home is thus also highly suggestive of previous acts (and conditions) of migration that precede the story of a “third generation” Swede. Nora’s refusal to give birth to her child also dissipates when she is lulled into dreamless sleep.” 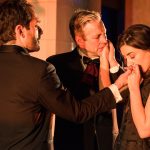 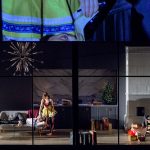 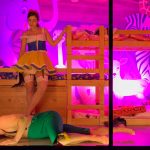 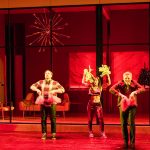 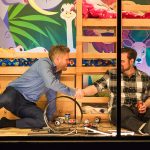 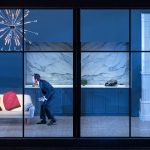 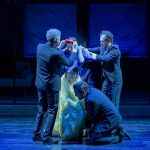 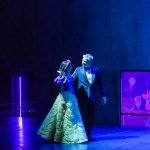 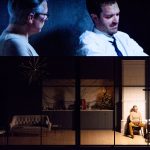 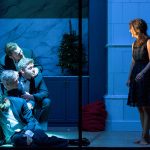 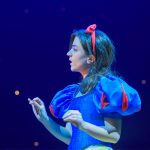 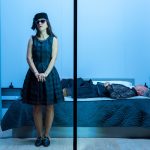