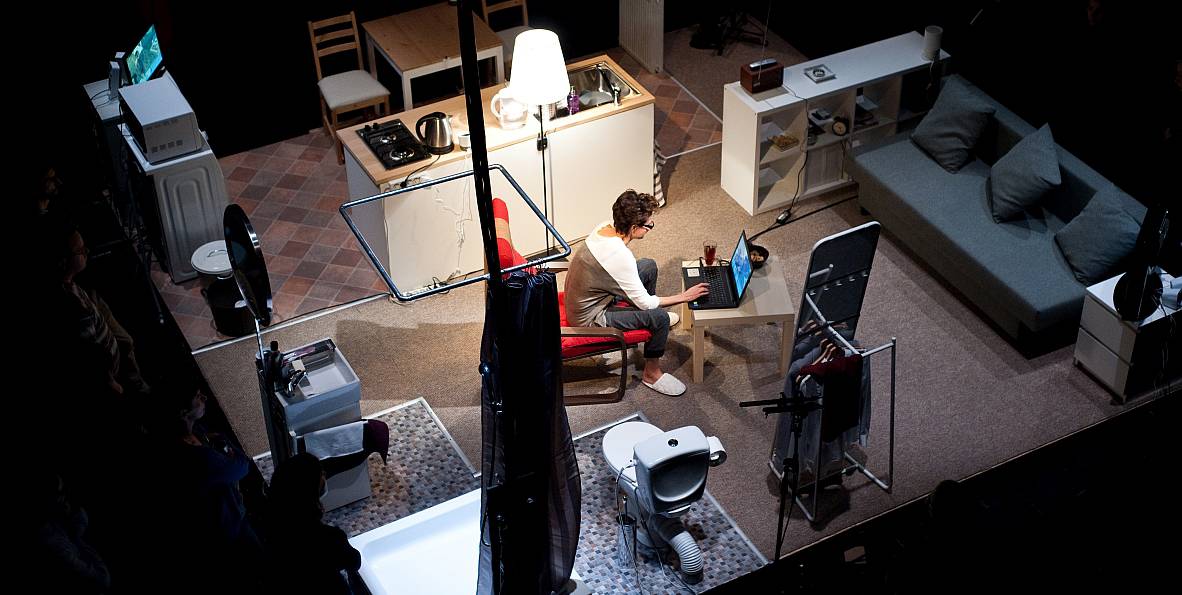 I don’t like monodramas. I think it is pretentious for one actor to draw all attention and drag out monologues. I don’t see Request Concert a mono-performance. There is a clear partner present. A radio host. He’s very real. They are in conversation together, even though she doesn’t say a word. This play is a great challenge for a mega-actress and a stubborn director. Everything has to be subtle, almost hidden. Hints, cues, clues and references are planted in every corner, but it is up to the audience to read their own story through them.

Language is a strong partner in theater, so is an actor ensemble. Working on Wunschkonzert I wanted to challenge these tools I often use and discard them in search for a different type of communication. How to work with human energy? Space between vocal communication? I wanted to highten our sense of intuitive presence. I wanted to give the audience freedom to choose how to process and watch the performance. For a major star, an actress of world fame, a big challenge, to give up the most powerful tool – her voice, was also a thrill and experiment. Can her power still reach the audience, can she communicate the rich and complex inner-world of her character without whispering one sound? How honest can we be facing each other in rehearsal without any other partner to lean on?

Intimacy was vital. We worked in this private apartment, rented for us to mimic the setting and we spent hours in each corner of it exploring her presence. Kitchen with radio, laptop and cup of tea. Bathroom ritual.

To respect the dramaturgy one must scrutinize and examine every single line and question its relevance to our generation, to the audience which comes to see the performance. For example, Kroetz gives Ms. Rausch a hobby… she is knitting a rug. She is actually about to finish her creation but the audience is not supposed to notice that the rug is done. We’ve spent a long time looking for her equivalent hobby. Not many modern women knit. Also, the internet did not exist in 1970s when the play was written but now, the online presence is overwhelming. We burn the midnight oil on facebook and online shopping. Danuta and I started to explore the possibilities of her internet presence. Would she be on the dating site? Is she interested in finding someone? Does she shop online. Does she have a porn addiction? We played for hours in such scenarios and discovered all possible clichés and had to kill these ideas one by one until we discovered Simms. A game, which allows someone to create an identity and a family and we thought this is something Frau Rasch could get in to. She started slowly by playing a few hours a day, creating a perfect husband and a daughter, a job and hobby as well. It gave a routine pleasure for the character to come home to this virtual family and to complete some tasks. Just like Kroetz writes that the rug is finished but the audience doesn’t notice, so does our heroine finished playing the Simms. She pops the disk out and puts it away for good. Relationship with this game returns at the end of the performance when the audience might feel they were part of someone else’s “Sims” game.

“Request Concert is new and unique language in the Polish theater, proposing radical subject and aesthetics different to our fashionable mainstream. Yana Ross crosses seamlessly into interdisciplinary. You have to go toward a hybrid of forms, on the border between performance art and minimalism, to escape the stage of verbose acting ejaculations. Even for a moment.”

“Request Concert” with a mega-star Danuta Stenka, is a suspense which feels like a Hitchcockian thriller. ”

“The well-known radio host reads out letters from his listeners and announces songs dedicated to them in his typical ironic style. For the main character, the radio program is another way to suppress the feeling of loneliness within her four walls.  After a while, spectators notice the grotesque gap between the stories of listeners who are happily in love and the main character who is left to herself. Romantic narratives gradually encircle the lonely woman. She looks as though she was defying orders to “look for the other half” and “smile despite the circumstances”. She feels left behind but also hounded by the “romantic idyll” orders. This peculiar anti-monodrama is filled with poignant emptiness. It is such an accurate representation of the daily grind that it is hard to bear. If you want to bear it, it is mainly because of the main (and only) actress.

Legendary Danuta Stenka is within the audience’s reach, standing by the kitchen sink or sitting on the lavatory. Her personality influences the mode of watching the performance to a large extent. The empathy felt for the lonely character turns into voyeurism and watching the star in a closed environment.

Working on the new adaptation of Kroetz’s play, Ross is establishing extreme intimate relationship with the audience. is Fascinating to watch not only Stenka but also the audience and their radically different responses to the scenic asceticism. It is also fascinating to watch Ross herself, standing among spectators and trying to spot their complex reactions. A demiurge whose creation may get out of control anytime.”

“A daily show with the Kardashians family and The Sims game compensate for the loneliness to which the woman is doomed. Digital characters she creates refer to her past. She manipulates and lives in the world created by herself. Not being able to find her place in the real world and fully enjoy her life, she experiences the virtual world as if she were actually part of it.”

“Request Concert is the diagnosis of contemporary human condition. The performance directed by Yana Ross examines loneliness without asking if it is by choice or coincidence. However, it suggests that no products from catalogues, healthy nutrition choices or substitutes for human interaction like  simulation games could ever replace the genuine contact with another human being. The main character’s suicidal act is an attempt to “correct” her own life, which, ironically, turns out to be partly successful as she is thrown out of the empty apartment into the crowd.”