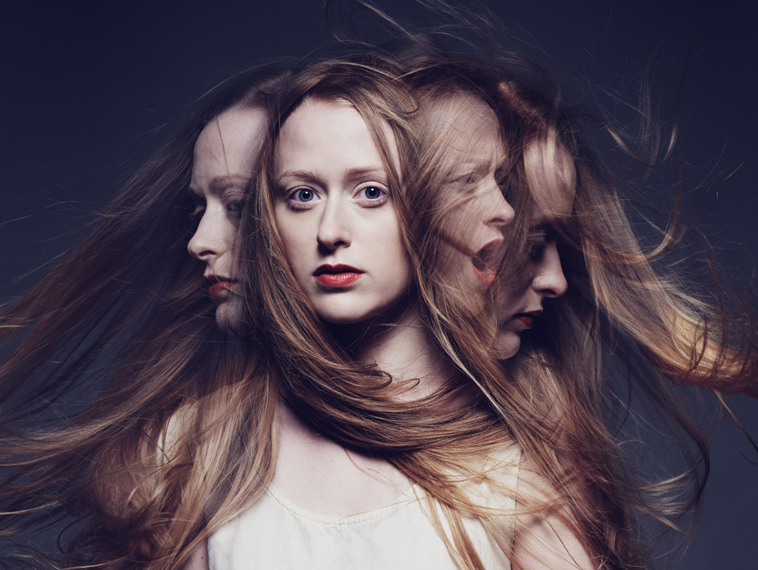 What makes Vanya sharp and contemporary writing now? The economic shift and industrial progress in our society suggests opportunities are bigger and brighter than 100 years ago but our nature is the same, we sit and complain and fear to make a simple change. What stops us from challenging ourselves, challenging our fate? Breaking up, falling in love, moving away? What a great comfort to sit around in the company of pseudo- friends and complain about time slipping through our fingers! How easy to become a slave to routine mortgage payments and mandatory martinis at the end of the day?

Anton Chekhov’s Uncle Vanya has traditionally relied on its melancholic and claustrophobic atmosphere for the development of its themes on self-fulfillment, the decline of the landed gentry and the dichotomies between cosmopolitan and rural living. In Yana Ross’s new production at the Uppsala Stadsteater this atmosphere has been both intensified and reinterpreted, providing a contemporary reading that offers alternative understandings of kinship, desire and relationships. Ross, a graduate of Moscow’s prestigious theatre academy GITIS and the Yale School of Drama, has quickly developed a reputation for radical adaptations of classic texts and contentious stagings of contemporary playwrights such as Elfriede Jelinek, Sarah Ruhl and Gabrielė Labanauskaitė. Her provocative and confrontational production of Tadeusz Słobodzianek’s Our Class (Nasza klasa) in 2013 at the Lithuanian National Drama Theatre that dealt with contested histories of anti-Semitism and Soviet-imposed communism captured the attention of European theatre directors and critics, prompting commissions from national and city theatres in Hungary, Sweden, Iceland, Finland and Poland.

Ross’ adaptation of Vanya opens with Sonya’s garden birthday party on a sultry summer’s afternoon. The combination of amber-coloured lighting, fog machine, and the flirtatious frivolities of the perspiring actors evoked a carnal mood more reminiscent of Tennessee Williams than Chekhov. The Stadsteater’s powerful surround sound system, a more familiar feature in cinemas than theatres, amplified the normally dulcet background sounds of the natural world to the point of anxiety–the aggressive swarming of wasps and flies filled the theatre, while birdsong was rendered cacophonous and unfriendly. This hostile encroachment of nature reinforced the libidinous tensions at work within the Serebryakov country estate, transposed as a bed and breakfast in a Swedish country manor house. Correspondingly, Astrov’s concern over the preservation of local forests was augmented to the point of a conspiracy theory. This drew a parallel between modern anxieties about environmental disaster and broader experiences of social division and economic instability, which lead to misdirected sexual and emotional attachments.

At an early stage in production, Ross and New-York based scenic designer Zane Philstrom were inspired by the American artist Gordon Matta-Clark, known for his ‘building cuts’ series in the 1970s that deconstructed family homes through the removal of walls and the dissection of ceilings, staircases and floors. Philstrom built the Serebryakov’s house from plexiglass, allowing the audience to peer inside the house’s more ambiguous spaces. Matta-Clarke’s critique of the American dream to become landed gentry through the purchase of private property provided another lens for performance analysis of the pretensions of Aleksandr Serebryakov, the retired university professor whose ambitions to be a wealthy landowner are finally destroyed at the conclusion of the play. While the transparent glass walls opened up multiple and simultaneous perspectives on bedrooms, hallways and the kitchen, the exposure of the bathroom was frequently the most revealing and resulted in a number of unexpected and comical interactions. A strong example of this was Astrov’s seduction of Yelena, a brief but energetic sexual encounter choreographed in time to the rumble of the taxi that waited to return Yelena and Aleksandr to their more glamorous cosmopolitan lives in the city. The sudden eruption of white mist behind the glass walls in moments of tension and

arousal was strongly suggestive of British artist Anthony Gormley’s 2007 participatory exhibition Blind Light in which spectators walked through UV-purified steam in a glass tank illuminated by fluorescent lights. One suspects that Gormley’s intention to produce a feeling of disorientation and euphoria for participants also chimes with the furtive encounters occurring in the Serebryakov household. In both Gormley’s installation and Ross’ production, the silhouettes produced through the use of steam and fog were suggestive of social encounters that are both intimate and alienating in unpredictable turns.

Littering the stage with electric guitars, a tambourine, a piano, a drum set and a children’s xylophone allowed the actors to make music at will. Ilya, the impoverished landowner, and Marina, the elderly nurse, were reimagined as a young gay couple staying in the bed and breakfast. The couple’s flirtations and spats were punctuated by the soundtrack they produced live on stage, which ranged from the sexual libratory, drug-induced rhythms of The Doors to the recurrent motif of teenage longing in Lana Del Rey’s Summertime Sadness. The arrangement of these musical elements problematized the extravagant unhappiness that normally sits at the heart of this play. Instead of bemoaning the tedium of provincial life, Ross restaged Chekhovian ennui as a drunken, marijuana and vodka-fuelled nihilism, silly and fleeting as the effects of the stimulants the characters regularly consume. While there is the impression that the members of the household might cheer up as soon as they sober up, the final image undoes this easy conclusion. The ‘final rest’ Sonya believes will exonerate human suffering in the source text is here translated as an unconscious state produced through the destructive repetitions of unfulfilled aspiration. While Vanya prepares the B&B accounts by reading out an interminable list of necessary supplies, Sonja throws herself repeatedly at the plexiglass wall of the house, behind which Astrov preens himself in the bathroom mirror. The violence of this repeated action leaves the glass covered in blood and Sonja passed out amongst the hotel provisions. Juxtaposing monotonous occupational duties with the repetitive quality of stymied desire, Ross challenges the underlying assumption of the salvationary character of labour in the play, which is exemplified by Sonja’s earlier claim that only work is fulfilling. Work is portrayed as the soulless administration of a bored clerk, checking lists and adding up accounts; while sexual longing is transitory and unrewarding. Concluding with this image, the melancholy of Uncle Vanya remerges suddenly and with unexpected force. 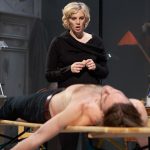 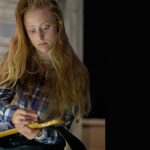 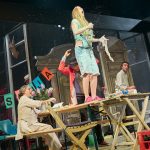 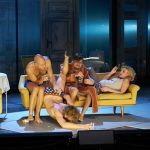 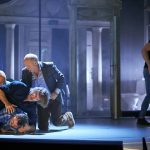 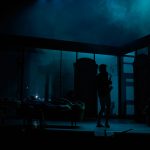 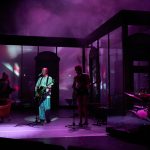 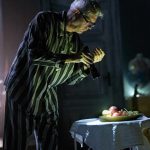 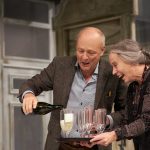