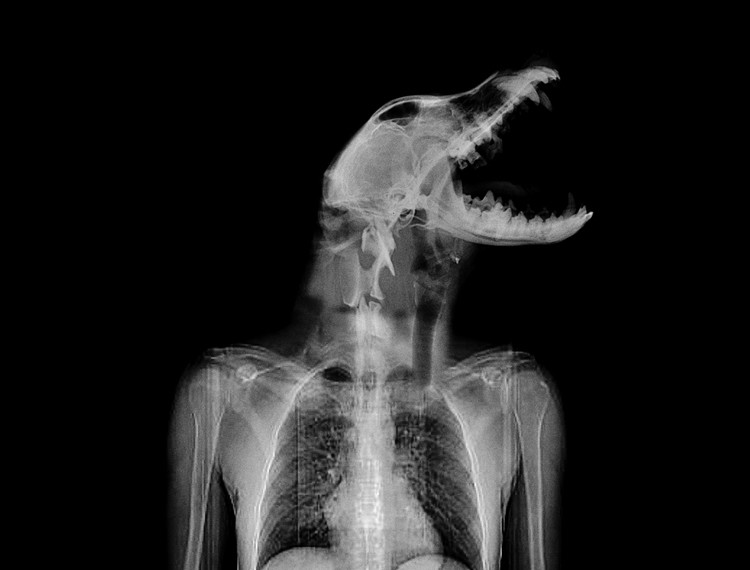 Bulgakov’s parabale about eugenics experiment gone wrong presents a great hybrid of animal and human gaining momento in the current political arena. Or is it a new messija? Does he promise salvation or distruction and who will take responcibility for bringing him into this world?

Performance shifts focus in a modern adaptation from bloshevik opportunism to the rise of right wing governments in Europe. Dealing with a refugee cricis current government faces a problem of finding housing for all newcommers to Sweden. A housing committee aproaches a famous plastic surgeon to take in a few refugees from Syria until the government decides what to do with them.  Professor keeps his eyes on science and is not interested in either politics or humanitarian relief.

Production questions current values of Western society and our attitude towards the “other”- a question of nature vs. nurture is at the core of performance. Who is responcible for bringing up a human being, does society have a better influence or a private circle of immediate family? What happens when family neglets and ideology imbraces? Is there a chance for reabilitation or is the process of forming personality an irreversible catastrophe?

“…To take on a subject of refugee crisis BEFORE the crisis unravels — one must have a “dog’s nose” to smell the danger before it spreads to the streets full of rallies, the impasse at the boarders and pictures of the dead Aylan Kurdie all over the news. The intuition is not enough to shine a new light on current European politics, one must also have a cunning intelligence to present a new vision. Yana Ross, the director of “Heart of a Dog” produced at Uppsala Stadsteater, Sweden succeeds in this complex maneuver when she turns her predominant discourse on refugees. To expose a camouflage of racism and complacent European policies we are faced with a parable of a dog transformed into a human via medical experiment.  […} Walking home after performance I couldn’t decide where exactly the fury was rising from– I was suddenly angry with all the ignorant fellow social media bourgeois helping spread the photograph of a dead boy washed by waves and his fate hared by the next wave of dead kids or the whole of the mankind in a mad race of ideologies legitimizing animal cruelty.” 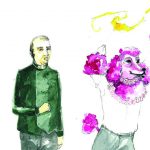 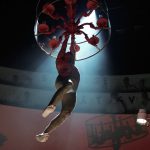 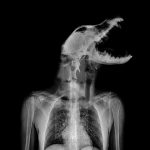 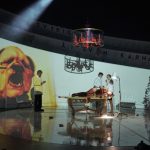 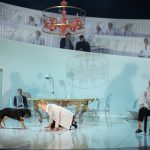 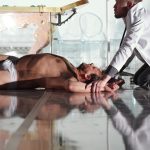 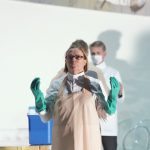 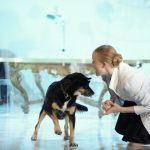 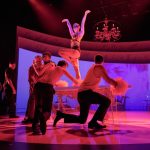 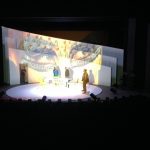 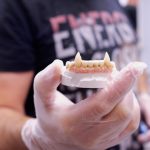 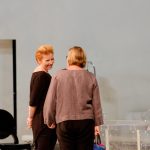