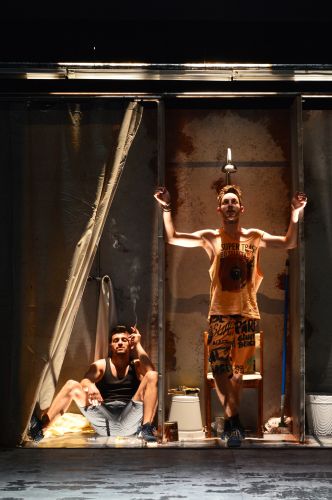 Cutting-edge dark thriller, comming-of-age tale of passion and angst with Faith. New Raskolnikov of 21st Century. Ethics and moral grounds for mortal sins. To kill, to keep one‘s word, to survive? New generation looking for moral grounds and building stamina to survive. New drama keeps audience on the edge of their seats, what-happens-next mode works wonders together with brutal energy of young actors. Generation gap and similarities with parents, falling in love and making the ends meet—all is packed tight in this fast and furious 1 hour 20 minute performance.

“ The Killer is a Russian contemporary drama focused on futureless life of teenagers at the countryside. Ross interpreted the piece as a road-movie and easily adapted the usage of video. The piece has a narrative structure with long monologues. Director’s creation resulted in drastic changes in dramaturgy – re-cutting the text in a more situational form and substituting some parts with video projections, scenes played entirely as a film scenes.

A road movie is grounded in multiple locations which were solved partly with a non-realistic set design filled with multifunctional props (like boxes, tires and shower cabins), partly with projecting exterior locations (a bus stop, highways, hills, a village, etc.). The background videos projected on shower curtains determined the changing of locations and through this the rhythm of storytelling and the whole performance flowed naturally. Moreover, they gave an extra layer to the plot, namely repositioning the story into Hungary instead of Russia. The videos showed an image of Budapest and the Hungarian countryside and rhymed this way with other hints of the performance (like singing Hungarian folk-songs and playing a Hungarian card game).

The final destination of the road was shown on video. At a playground the protagonist meets his destiny, the leader of local mafia played by Kornél Mundurczó. With this reference Ross linked the performance not only to Hungarian reality but also the Hungarian theatre scene, where as she suggests the young generation should take over the place.” 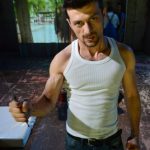 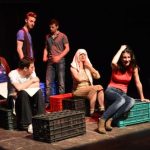 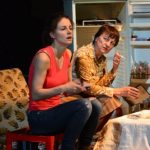 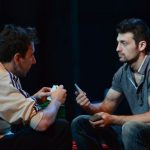 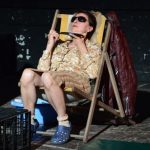 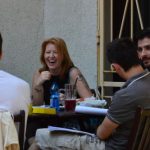 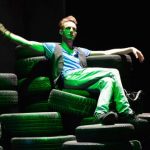 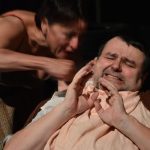 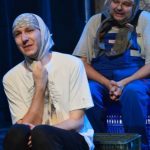 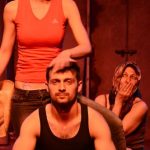 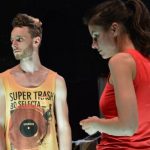 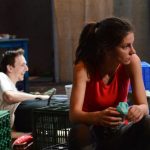