I don’t want to give away the deeply shocking and disturbing finale, but it must be said that director takes a radical step turing sacrificial ending into merciless revenge fantasy. Ross is staying true to Ibsen’s irony, she sets the tongue-in-chic ending to gorgeous operatic aria, “a prayer for peace” from Bellini’s opera Norma. It has been debated endlessly who has the right to twist the original writer’s intentions, but with the birth of director’s theater over a 100 years ago, those questions are still rise up once in a while, and artistic freedom sometimes raises too many eyebrows. But to me it is valid if the adaptation opens ups new important inights.

The live-video feed of the gorry and extra bloody finally is bringing associations of American shooting dramas and our very own Breivik tragedy. I think one of the messages director is sending to us is that the cause and effect of bad parenting can be truely horrifying: there are many injured villains and many neglected children around the world – here you see why they take revenge on their own.

The second, bold approach is that the director has chosen a person with Down’s syndrome to play Hedvig, who in Ibsen’s version is becoming blind. Does this function? The answer is: yes, absolutely brilliantly. Some years ago, Marte Wexelsen Goksøyr did an excellent performance in the play I answered a dream. Now Anne So e Kvalvik succeeds in interpreting 14-year-old Hedvig. In a conversation with Gregers – which we now understand is Hedvig’s half-brother – Kvalvik manages to mediate the grief that his father is not fond of her anymore because she is not his daughter. It’s a heartbreaking scene.

Much in Ross’s performance follows Ibsen faithfully. It starts as festive dinner party welcoming home a progidous son, pickled herring and dessert wine, but ends in a rage that can remind of the Danish clasic Festen. Gregers himself is an injured child who thinks his father Håkon is digusting- “you with your whores” – you drove my mother to suicide.” It’s hard for him to accept and forgive his father’s new found happiness with Berta.

Ross also lives up to the mix of tragedy and comedy Ibsen put in, and the actors do a brilliant job. The scene where old Werle and his new bride will take wedding photos in Ekdal’s photo studio, is precious and wide-ranging with irony against the happiness of the new marriage.

Then Ross builds up to the errifying reinterpretation – that it is not Hedvig, but the adults around her who are punished with death for their neglect and sins. Animal faces are projected on the side walls – owls, tiger, rabbits and bears- which then morphs into the faces of the actors on stage. In this way we get an unpleasant reminder of the wild animal inside a civilized man.

Harry Potter birthday party for Hedvig is hillarious. The down-syndrome Hedvig is unwhilingly humilated with a Voldemort rubber mask, which Hedvig really enjoys but looks like a little monster. All these extra layers and elements work well in the performance. One of the gifts she gets is a magic wand. I wondered if this magic wand had a meaning, a layer— and, it really was a stunning surprise after the masacre, Hedvig faces the audience with her magic wand, whipping away the horrors of her reality, she dances full of radience and joy. Director masterfully gives the audience a realease, room to breathe and ponder and process, while a brave actress dances her heart away. Ross creates an alternative, a dream that parents and children can reconcile with each other and wipe away the evil betrayed – as if with a magic wand! 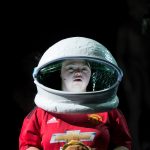 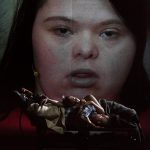 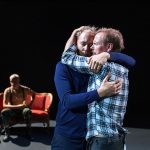 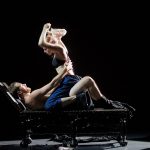 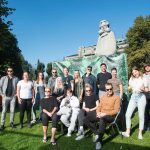