Horvath gradually came to the conclusion that human beings must feel guilt for their coldness of heart, for their inability to love. Evil doesn’t prevail because evil people are too numerous or powerful, but rather because good ones become pragmatically cynical and do not resist, choosing to keep silent. Horvath translates history into genealogy by representing the bourgeois family as a site where middle-class values are disseminated and preserved and where the public and the private intersect. Thus the story effectively reveals the self-deceptive jargon of ideology within the institution of the bourgeois family.

Tales from Vienna Woods is Ödön von Holváth’s scathing depiction of Vienna’s Kleinbürgertum, the petite bourgeoisie that played their own crucial role in the ‘demise of the Weimar Republic and the subsequent rise of National Socialism’ in the interwar period. Yana Ross recently adapted this text for the State Youth Theatre in Vilnius to a contemporary Lithuanian context, provocatively turning the deprivation and humiliations following the loss of the First World War into the ‘victorious’ period following Lithuania’s regained independence in 1991. The binaries of winning and losing that frame the source text are tested to their limits in these cultural conditions. While Horváth’s Austrian characters argue that they surely would have won WWI if only the conflict had lasted two more weeks, in Ross’ adaptation Robertas (the Captain) complains that he would have been given an honourable discharge from the Soviet military if only independence had been delayed. At the same time, the widow Valerija (Valerie) exclaims that it was independence that made her rich. Thus, from the outset, Ross exposes the broad (and often ambiguous) spectrum of social consequences of Independence, for both its seeming victors and its obvious losers.

The eponymous ‘Vienna Woods’ is transformed into a former gymnasium that can now be rented for parties, funerals or weddings. The set is a downtrodden interior of functional Soviet-era architecture, which draws attention to the pomposity of the former system and the austerity and dispossessions of the current one. The pink paint on the walls has been hurriedly and inaccurately applied to slouching walls and the parquet floor bubbles from flooding that signals broken pipes and poor heating systems. The opening scene revolves around a funeral, which is repeatedly interrupted by the entrance of new characters who are either unsure how to participate – ‘Lovely funeral!’ one mumbles – or are overly concerned with their own problems – ‘Where are my socks?’ another grumbles. (When a member of the audience’s phone rang in the middle of this scene on the night I attended the performance the disruption added to the dark humor of the play – rather than drawing attention away from the stage world we felt even more perversely implicated in it.) The grim but humorous ritual is punctuated by the tinny sounds of an electric keyboard that also resists participating in the gravity of the ceremony by blurting out its prerecorded cheerful, high-pitched tunes to the pianist’s great chagrin. This world is a patchwork that barely holds together. One tries but never quite gets it right. Life in this place accumulates as a series of exhausting, comical and humiliating rituals (parties, funerals and weddings). And it is clear that there is nowhere else for these people to go. Even when characters exit the stage you sense them hovering in the wings, lost, directionless.

What Ross shares with Horváth is the primary scene of conflict: Marytė’s (Marianne) rejection of the man her father has chosen for her, the financially stable butcher Oskaras (Oskar), in favour of a pecuniary figure of her romantic interest Alfredas (Alfred). Ross stages the initial wedding between Marytė and Oskaras as the background to her seduction of Alfred, thus creating the necessary tension in a contemporary relationship while, at the same time, offering a disturbing take on beloved Lithuanian customs. After announcing that ‘our nation is famous for cutting life short,’ one wedding guest suggests that her fellow celebrants indulge in ‘hanging the matchmaker’. Tradition requires the matchmaker (usually a male in Lithuania) to be sentenced to death because he has lied to the bridegroom about the bride’s dowry. The bride is supposed to rescue the matchmaker before the execution, and the guests are invited to hang his effigy instead. This apparently benign ‘game’ turns unexpectedly violent, and the matchmaker is left stripped and unconscious beneath a table laden with nuptial meats. While the guests then participate with lascivious ferocity in another beloved ritual, the sauna, Marytė defies her father, her fiancé and her society and chooses to pursue her own object of desire, the youthful and intensely sexy Alfredas, which causes total havoc and mass anxiety in her community.

The world conspires to bring Marytė back into the frame of male domination. After giving birth to their son, Marytė is convinced to leave the child with Alfredas’ mother outside of the city, in a village where the air is cleaner. The mother, horrified by her son’s inappropriate match, quickly takes the opportunity to convince Alfredas to leave Marytė to pursue his own interests and a more prosperous future as an economic migrant in Norway. Horváth carefully crafted the dangerous eruptions of nationalist fervor in a scene that begins in a pub and drunkenly ends in a cabaret, where Marianne works as an erotic performer after Alfred abandons her. In this adaptation, Marytė take up online pornography as a means of supporting herself and her child. Ross’ brilliant turn here is to expose the internet as a space of capitalistic voyeurism and inverted shame (which invites some critical re-readings of the cabaret form). The patriarchal violence that produces the status quo in Horváth’s text is imaginatively applied to the digital sphere, which demonstrates how the reach of patriarchy today extends far beyond one’s geographical borders. In the back of the stage, there is a room sealed off by a pane of glass, a voyeuristic world in which we first encounter the semi-naked bodies of the wedding guests in the steamy sauna, and where later Marytė is forced to play with multiple phallic vegetables (organic dildos) in front of a live camera. The man watching her turns out to be the old military captain, who invites Marytė’s own father to become a fellow spectator of her streamed performance. Like the inevitable chain of a chemical experiment, this produces a string of reactions whose violence is multiplied with each new event that begins with the father’s enraged attack on the captain and ends in Alfredas’ mother leaving Marytė’s son by a window so that he catches pneumonia and dies. In a small but heartbreaking move, the bubble in the parquet floor becomes the child’s grave. The funeral and the lack of any alternatives leaves Marytė with the only choice she has left, to marry Oskaras, the man her father had chosen for her.

If Horváth deploys schmaltzy and nostalgic music such as Johann Strauss’ waltz that appears in the play’s title and calls to mind the cream-cake version of Austria, Ross turns to Swan Lake, Tchaikovsky’s intensely loved ballet that revolves around a story of sublime love and moral vindication. The crushing difference between the German/Russian fairytale and Marytė’s reality offers a brutal glimpse into the structures of Lithuania’s social economies that also calls into question forms of national belonging. It should be no surprise that Horváth, who was himself multilingual and multinational in the old Hapsburg sense, should be so critical of national claims to ethnic integrity and cultural singularity. In the source text, Erich stands for the new Prussian influence that dwells within the heart of the Nazi movement. Ross turns him into Erikas, a lean, blond man who fetishises the purity of the Lithuanian nation when he reveals an enormous tattoo on his back that he calls a ‘Hippocentaur’, a centaur with a snake in place of a tail. This ridiculous creature, which features on both Lithuanian and Polish coats of arms (though Erikas claims it as ‘pure’ Lithuanian), proves that ‘our strength is in the glory of our past’. Audronis Liuga, artistic director of the Youth Theatre, suggested that the production asks spectators to consider how they reflect on the past in their everyday lives. Valerija sums up the whole of Lithuanian history in two sentences: ‘One thousand years ago we slaughtered Bruno of Querfurt. And from then on, everyone is slaughtering us.’ History is thus a source of pride and anxiety, and the persistent return to history in conversations throughout the play reveals how the very emblems of nationalism are simultaneously sources of nationalist defensiveness. One of Ross’ most controversial (and brave) choices was to question the role of Lithuanian partisans, who waged a guerilla war against the Soviets between 1944-53. These are heroic figures – whose deaths are still problematically characterized as a form of genocide in Vilnius’ Museum of Occupations and Freedom Fights – that form the pinnacle of Lithuanian patriotism. When one woman recalls the sexual violence perpetrated by the partisans she is quickly silenced and told that she is selfish and ungrateful for their sacrifice.

In the final scene, the community stands together to have their portrait taken by a photographer. Defeated and punished for her disobedience, Marytė takes her spot beside Oskaras in the line-up. The theatre plunges into darkness. When we see the flash, the camera is facing us, the audience. We too are frozen in our own historical moment, which is once again magnified by the threat of fascism in Europe. What is most unsettling about this play is our knowledge that this ‘tale’ precipitated the Second World War. Horváth was virtually forgotten in the postwar era and was only resurrected in the late 1970s, and though he is now considered one of the foremost German-language playwrights of the twentieth century (Peter Handke claimed that he deserves more recognition than his contemporary Bertolt Brecht) his work remains difficult to classify as a specific movement or genre. Perhaps this is what makes his texts such rich ground for experimentation for our most talented and boundary-shifting directors, such as Yana Ross. This production can be seen within a broader trajectory of performances that have interrogated Lithuania’s difficult pasts over the past few years at the Lithuanian National Drama Theatre, where Liuga was formerly artistic director. These include Ross’ staging of Tadeusz Słobodizanek’s Our Class and Krystian Lupa’s production of Thomas Bernhard’s Heldenplatz, which both reveal the stakes and legacies of fascism. Whenever Tales from Vienna Woods is staged – a rare event in Lithuania – the play signals a cautionary warning. By looking back to the past for stability and clinging to the status quo ante, what horrifying aspects of history might we also be reanimating? 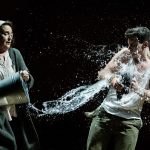 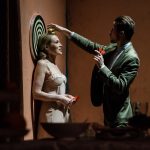 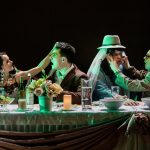 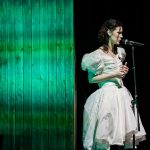 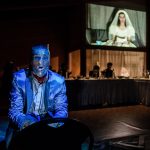 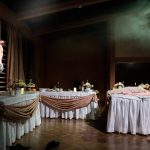 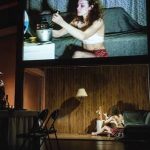 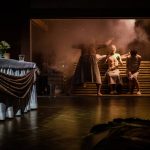